I was so excited to get a request from Rebecca Kovach to interview Mike Fishkin, a young man who hosts a radio show Gone Fishkin on Idobi Network. 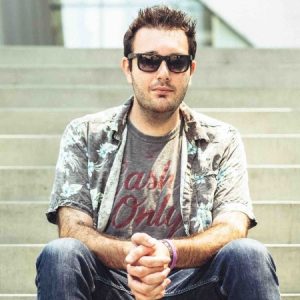 c. The station broadcasts over the internet via its website, iTunes and SHOUTcast. idobi connects listeners with artists through interviews and up-to-date music industry news, and by giving popular artists their own radio shows. The stream has an excellent track record of playing tracks from top unsigned artists, many times before they make it onto terrestrial radio stations or MTV rotation, most notably having featured artists like Good Charlotte, Fall Out Boy, and All Time Low prior to the bands’ mainstream successes.

Gone Fishkin is here to bring listeners songs they’ve never heard and songs they’ll soon fall in love with. Straight out of Los Angles, Gone Fishkin interviews both rising and established artists and entertainers. Mike’s not afraid to tell a joke, be awkward, or get the party started, so be sure to listen every week because who knows what he’ll do next.

Mike Fishkin’s passion of loving to promote up and coming bands, giving them as much exposure as possible, resonated with me as it ties in with the premise of my site – to celebrate those who tweak the golden thread.

You can listen to his show here

Mike recently helped organize an event in honor of his late father Stuart, who passed away from pancreatic cancer last year, and succeeded in raising over $50K for Atalie’s Hope.

Hi Mike, and welcome to Pop Speaking. You and I share a common interest – you love to interview bands you grew up listening to, too. What drives you to do this?
Yoooo! Thanks for having me! That’s dope, what really drives me is my love for music. I’ve been listening to music since I was born basically. Whether it be in the car with my Mom while she’s blasting Goo Goo Dolls and Bon Jovi (exclusively) or when my Mom wasn’t around my Dad blasting Eminem, NWA, some old school punk or the calmer more family friendly The Go-Gos, I always found I loved music more than almost anything (food is a close second). I tried being in bands from basically 6th grade till my freshman year in college and it never really worked for me, neither did working for bands. As much as I loved doing it I couldn’t see myself doing it full time or anything so radio is a dope place for me where I can help any bands that hit me up basically and I get to share music people love, will love, or forgot they loved with them. 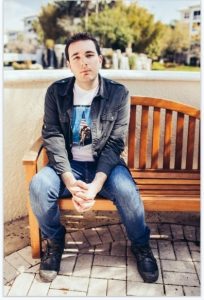 Tell us about “Gone Fishkin” and your involvement with idobi Radio?
Gone Fishkin is my show I’ve been doing on idobi for about 3 years now. Gone Fishkin was actually my fantasy baseball team’s name about 5 years ago and I thought it’d be a cool name for my show when I started it. The show is my way of expressing myself because I hate writing so I get to talk on air for 2 hours which is better than a Tumblr post or a long Facebook status that’ll annoy people in their feed. I have a lot of roles at idobi besides Gone Fishkin! I host idobi Warped Radio, so I headed out on Warped for the third straight year to get all the interviews we needed for the summer again, I’m our social media manager so any typos you can blame on me haha, I’m our founder and CEO Tom Cheney’s assistant, I prep some shows for air along with making them podcasts, so basically anything that needs to get done I’ll get done for us.How did you get started in music and get into internet radio? Is there a particular reason you prefer internet radio to more traditional forms of radio?
I got started in music after I heard “The Anthem” by Good Charlotte. I was in 5th grade and made my parents get me a guitar for Christmas. I took a few lessons and hated taking lessons cause I hate the idea of a school like setting so my neighbor taught me some basics and then from there I looked up tabs for some of my favorite songs and just ripped those songs off playing them a few steps down haha so that’s basically how I learned how to play music. From there I put demos on MySpace where I learned to promote and what sucks and doesn’t suck. Worked for some bands in high school and college after the band thing didn’t work out for me and then started doing radio! I like internet radio because there’s basically no rules when it comes to what I can play and what I can say. Being on college radio was stressful because one wrong word could cost me way too much money. Since I started idobi they’ve basically given me the freedom to keep my show the way I want to keep it and they’ve made parts of it better but never were like “You have to do this or else” type thing. That’s what I love about idobi.

You recently organised an event in honour of your dad Stuart, who passed away from pancreatic cancer. Please tell us about this event.This event took place about a week before Thanksgiving so I flew back to Long Island for it. My Mom and close family friends did most of the work organizing sponsors and the event in general. They did an amazing job. It was great having a tribute to my Dad while knowing we were helping other families going through a similar situation by raising $50K for them. What is Atalie’s Hope?
Atalie’s Hope is a charity we teamed up with to throw the first annual event for in honor of my Dad. The money was donated to grievance groups for families who lost a love one. They were great at showing us how these things work but we’ve since decided to start our own charity called Stu’s Helping Hearts.
I have also heard about the Stuart Fishkin Memorial Scholarship. Can you tell us more about this?
This was started by some of my incredible neighbors, the Marra family, who’ve been there for us through anything since I was born. They used to baby sit me while I was a kid too. They started it in honor of my Dad for a one student a semester at the college I went to and Jess Marra teaches at: Nassau Community College. You strike me as the kind of person who would also (like me) be interested in the golden thread of humanity, which is what inspired my website. It’s (as described by John Ritter) a thread which runs through generations, genders, nations, and decades, and makes people think and feel. For example, an actor who did a show in the 1970s can make generations from today and those yet unborn, laugh, love and feel. Is this something that interests and inspires you and do you like to celebrate others who do that?
I love timeless classics and respect the people who did things before anyone else did. I love playing bands that were the bands that inspired most of my guests that my listeners may not know about. I have a sister who’s 10 years younger than me and it’s cool seeing her reaction hearing songs I heard for the first time at her age and hope other people have the same reaction hearing songs I play on my show. I could only dream of having a legacy like that.You also travel around a lot and cover big music events. Is that a passion of yours?
Yeah! I always wanted to be in a band so being able to travel like I’m in a band and work with so many incredible artists is something I definitely LOVE!How would you advise anybody wishing to get into either music or internet radio today?
Know your place. You’re going to start out and be at the bottom of the totem pole. You’re not going to get to work with your favorite bands at first but just keep at it and grow with the people around you in the same situation. It’s not a competition we’re all in for the same reason so help everyone out. I hate when people say “don’t be a fan” while talking to bands because what’s the point of lying? If you love a band tell them, don’t try to “play cool”, if you want a picture after the interview ask for one, you’ll remember it forever. Don’t over step any boundaries like if you have someone’s number for a phone interview or a contact for an on site interview, don’t hit them up unless they say you can. Be nice to everyone because everyone knows EVERYONE, the one bad thing you do can easily overshadow every other good thing you’ve done.Is there anything else you’d like to bring across in this interview?
Thanks for taking time to learn about me! It’s always cool being on the other side of the interview. Tune into Gone Fishkin every Thursday night at 9PM ET on idobi Radio (ido.bi/player) and keep up with me on Twitter, twitter.com/gonefishkin.

COVID-19 - SA. Get the right information. As per the government's request I'm placing the link to the official site about the Coronavirus pandemic in South Africa on my site. Please place the link on your sites. It's the responsible thing to do. At the same time I'm looking forward very much to the day when I can take it down. https://sacoronavirus.co.za/ #typeitright #covid19